In November, the Kenyan capital Nairobi played host to a three-day summit to mark 25 years since the landmark International Conference on Population and Development (ICPD). Fiona Coyle - Director of the End FGM European Network - was there and gives us her takeaways. 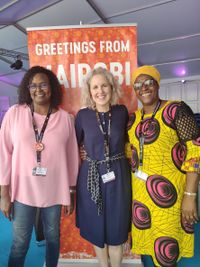 Nairobi was a big moment and many network members were in attendance including AIDOS, AkiDwA, Equipop, GAMS Belgium, FORWARD, Save a Girl Save a Generation and the Orchid Project. The moment was used to highlight the Global Platform for Action, which is a collaborative civil society initiative, calling for urgent action to accelerate ending FGM by 2030.

Here are some takeaways;

The shining stars of Nairobi summit were the young people. They were there in force representing all continents and groups such as those living with disabilities, indigenous and LGBTI communities. They brought energy, passion and often anger. They stood on stages with political leaders and asked them why not more is being done.

Youth activists and FGM survivors were also making their voices heard. On day one, our member the Orchid Project and in collaboration with COVAW, Amref and Tostan, organised a side event “Partnerships for Change: Ending FGM/C by 2030”. The highlight of this event was the input from 4 young women, each with their own story and each working tirelessly to end FGM in their communities. They reminded us of the urgency of our work and the powerful role of young people. 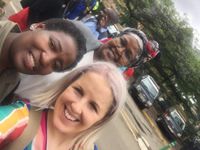 Although not framed as a pledging conference over 1,000 commitments emerged in Nairobi. Many African governments spoke strongly of their commitment to ending FGM including the host government, Kenya, pushing forward its deadline to end the practise from 2030 to 2022 (although this was a repeat of a commitment made at Women Deliver). There were also commitments to tackle the cross-border nature of FGM in Africa. In contrast, governments from other continents were not quite as vocal on their commitment to End FGM (Yes, in particular India and Malaysia!). Nevertheless, pledges have been made and without follow up these commitments will be no more empty words.

We need formal accountability mechanisms, but we also need to understand if progress is happening and to do this we need data and evidence. The need for more evidence was another re-occurring theme of the summit. Within the movement to End FGM the lack of evidence is often stated as one of the key challenges.

"My take away from the conference was the need to have more information on evidence and what works, more on what progress has been made at the country level and more focus on accountability, it was great having so many parliamentarians from many countries and was surprised to see a young women youth parliamentarian from Mali talking about progressive policies on teenage pregnancy and girls rights".

Within the broad spectrum of issues being addressed by ICPD, and indeed the SDG’s more broadly, there is one common challenge - women and girls do not have control over their own bodies. Globally societies are still patriarchally dominated. Many of the sessions we attended looked at gender dynamics as the structural barriers to change yet there was little discussion about this on the main stage. We need to break out of our silos to aim higher and address this common underlying cause.

Specifically, for FGM we need to address the power and gender dynamics as these are critical - it is important to work at multiple levels, household, community and address the structural drivers including economic empowerment - women and girls do not have power over their bodies and it is important that interventions tackle that directly and upfront.

As outlined in this article there is a certain sense of conference fatigue, there is a questioning of why we are celebrating announcements as if they were achievements. In the case of FGM, as outlined in our global call to action we need to advocate for greater prioritisation, resourcing and action to end FGM. Yes, the Nairobi summit was a powerful moment, but its success should be judged on the impact it has on the lives of women and girls. Will Nairobi be remembered as the last ever ICPD conference? We need urgent action. If we are reconvening in 25 years for ICPD50 then we have failed.