Female Genital Mutilation comprises all procedures involving the removal of the external female genitalia or other injury to the female genital organs for non-medical reasons, as defined by the World Health Organisation (WHO).

Female Genital Mutilation comprises all procedures involving the removal of the external female genitalia or other injury to the female genital organs for non-medical reasons. On average girls are subjected to FGM between birth and age 15. FGM is not prescribed by any religion and has no health benefits. On the contrary the practice can cause life-lasting physical and psychological trauma. 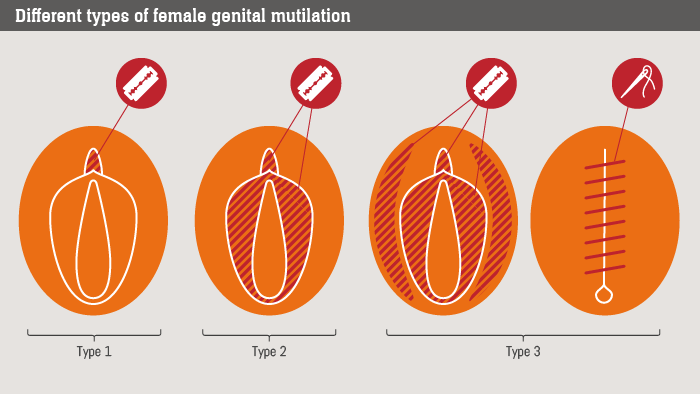 Recent estimates indicate that around 90% of cases include clitoridectomy, excision or cases where girls’ genitals are “nicked” but no flesh removed (Type IV), and about 10% are infibulations (WHO).


How is FGM practised?

The type of mutilation practised, the age at which it is carried out and the way in which it is done, vary according to a variety of factors. These include:

The procedure is carried out at a variety of ages, ranging from shortly after birth to sometime during the first pregnancy. It most commonly occurs between the ages of 0 to 15 years and the age is decreasing in some countries. The practice has been linked in some countries with rites of passage for women.

FGM is usually performed by traditional practitioners using a sharp object such as a knife, a razor blade or broken glass. There is also evidence of an increase in the performance of FGM by medical personnel. However, medicalisation of FGM is denounced by the World Health Organisation.

Immediate consequences of FGM include severe pain and bleeding, shock, difficulty in passing urine, infections, injury to nearby genital tissue and sometimes death. The procedure can result in death through severe bleeding leading to haemorrhagic shock, neurogenic shock as a result of pain and trauma, and overwhelming infection and septicaemia, according to Manfred Nowak, UN Special Rapporteur on Torture and other Cruel, Inhuman or Degrading Treatment or Punishment.

Almost all women who have undergone FGM experience pain and bleeding as a consequence of the procedure. The event itself is traumatic as girls are held down during the procedure. Risk and complications increase with the type of FGM and are more severe and prevalent with infibulations.

“The pain inflicted by FGM does not stop with the initial procedure, but often continues as ongoing torture throughout a woman’s life”, says Manfred Nowak, UN Special Rapporteur on Torture.

In addition to the severe pain during and in the weeks following the cutting, women who have undergone FGM experience various long-term effects - physical, sexual and psychological.

When giving birth, the scar tissue might tear, or the opening needs to be cut to allow the baby to come out. After childbirth, women from some ethnic communities are often sown up again to make them “tight” for their husband (reinfibulation). Such cutting and restitching of a woman’s genitalia results in painful scar tissue.

A multi-country study by WHO in six African countries, showed that women who had undergone FGM, had significantly increased risks for adverse events during childbirth, and that genital mutilation in mothers has negative effects on their newborn babies. According to the study, an additional one to two babies per 100 deliveries die as a result of FGM.

Read the WHO collaborative study on FGM and obstetric outcome

FGM is practised on girls usually in the range of 0-15 years. Hence, the practice of FGM violates children’s rights as defined in the Convention on the Rights of the Child (CRC):

According to the UN Committee on CRC, “discrimination against girl children is a serious violation of rights, affecting their survival and all areas of their young lives as well as restricting their capacity to contribute positively to society” (2005).

Moreover, the negative effects of FGM on children’s development contravene the best interest of the child - a central notion to the Convention (Article 3).

Because it is performed without the consent of the girls, it also breaches the right to express freely one’s view (Article 12). Even if the girl child is aware of the practice, the issue of consent remains, as girls are usually too young to be consulted and have no voice in the decision made on their behalf by members of their family. On the other hand, adolescent girls and women very often agree to undergo FGM because they fear the non-acceptance of their communities, families and peers, according to 2008 Report of the Special Rapporteur on Torture.

FGM also impacts on the right to dignity and directly conflicts with the right to physical integrity, as it involves the mutilation of healthy body parts.

The Committee on the Convention on the Rights of the Child has said that States party to the Convention have an obligation “to protect adolescents from all harmful traditional practices, such as early marriages, honour killings and female genital mutilation” (2003).