Our Portuguese Youth Ambassadors organised a Webshop on the importance of involving young people in the fight against FGM!

As announced in July, our Portuguese Youth Ambassadors, Ana Aua Só and Fatu Banora, took the initiative to organise an Online Workshop on the importance of involving young people from the affected communities in the fight against FGM, after they participated in the elaboration of the End FGM EU's Youth Engagement Manifesto.

For APF, youth participation is crucial: there are young APF groups across Portugal who work on different Sexual and Reproductive Health and Rights's themes. FGM is particularly relevant in the geographical area of Lisbon. Yet, many young people felt that they had not yet had the opportunity to approach this topic and, thus, to support the fight.

This is why the Webshop took place: around 25 young people participated and celebrated the publication of the Portuguese version of the Youth Engagement Manifesto. On 15 July, there was a horizontal dialogue from young people to young people, where our Ambassadors were able to speak for themselves about a cause they are deeply committed to. 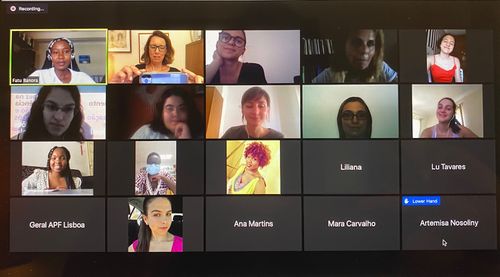 This Webshop was also disseminated in one of the main Portuguese newspapers, that titled the article: “Young women from communities affected by female genital mutilation are taking the floor”.