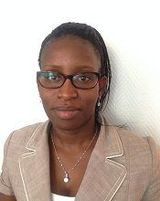 Short bio: Djeynaba graduated in private law in 2008 and in human rights and peace in 2009 in Dakar, Senegal - earning a legal assistant degree in France in 2012. Djeynaba has worked as a court clerk in Senegal, Dakar regional court and a High School educational assistant in Paris since 2013.

Djeynaba has been tackling the issue of FGM alone for many years and now wishes to act on a more broader, international level to End FGM.

Having undergone FGM at a very young age, Djeynaba became an End FGM activist and now wishes to work to eradicate FGM.

Djeynaba gave birth to her daughter in Senagal in 2008, leaving her in the care of her parents when returning to work. Worried that her family would cut her daughter, Djeynaba invested in her legal training to insure her daughter and nieces safety from FGM.

Djeynaba is also a volunteer in EQUIPOP as well as working at VOISINMALIN, an association of the 19th division of Paris by carrying out awareness and information activities for the district.