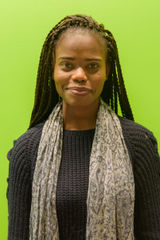 Country of origin: The Gambia

Short bio: After seeing the consequences of FGM in her own sister, Aji fled Gambia as she feared she would be subjected to FGM and has been granted international protection in Cyprus. Aji decided to become an End FGM Ambassador because, although FGM has been banned in The Gambia, she believes it will take more than a legislation to stop the harmful practice.