Our position paper on "Female genital mutilation and international protection: Towards a human rights-based and gender-sensitive Common European Asylum System" was released in November 2016. 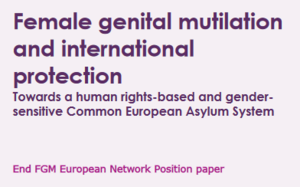 Concerned about the human rights situation of asylum-seekers and other migrants in the European Asylum System, especially women’s and girls’, the End FGM European Network decided to dedicate a large part of its work in 2016 to international protection, in order to assess the discrepancies of the EU Asylum System.

An assessment of the treatment of gender-related claims in EU Member States, including FGM-related claims, shows disparities between Member States, but also at national level between law, policies, theory and practice, and even between asylum officers. Advocating for a fair and sensitive asylum process across the EU for all asylum-seekers, especially for FGM Survivors, women and girls at risk and their relatives, and human rights defenders opposing the practice, this position paper addresses a limited scope of issues impacting on FGM-related claims in the asylum system, namely country of origin information and credibility and vulnerability assessment, and provides related recommendations.