On the 6th of February - International Day of Zero Tolerance for Female Genital Mutilation - End FGM EU launch their new 2018 campaign: ‘FGM is #MyIssueToo‘. The campaign will run throughout 2018 and is calling on the public to participate and contribute to its mobilisation. 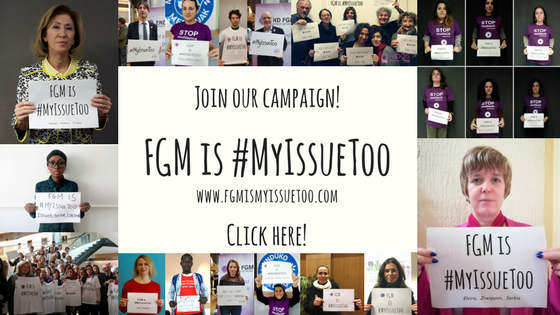 So what does the #MyIssuetoo hashtag stand for exactly? “While FGM may not affect you or your loved ones directly, it still has effects on your life in other ways…” – states Chiara Cosentino, Advocacy Officer for End FGM EU.

“When a girl undergoes FGM she becomes part of system that discriminates against women and girls simply because of their gender and this manifests in the controlling of their bodies. This restricts women and girls from accessing their basic human rights, including their dignity, freedom from violence, right to health and access to education. As a result, there are 200 million women and girls worldwide living with the lifelong consequences of FGM, and over 130 million girls are missing from our classrooms.”

Moreover, systems are suffering, with teachers loosing young female students or dealing with girls showing psychological trauma. Health professionals, including midwives, gynaecologists, psychotherapists, surgeons, are left to treat the dire physical and psychological consequences of FGM and assist women throughout their lives and the private life of thousands of families are affected, with husbands, fathers and brothers seeing the suffering and pain of their wives, daughters and sisters.

These are only a few examples to describe how people from all over suffer from the absence of women and girls taking an equal role. With no one to represent them, women lose their voice in society – causing oversight in their rights and needs.

“Without the balanced presence of both men and women, society cannot function fairly and equally. So you see, FGM is #MyIssueToo.” Often, FGM is neglected by the majority of the population and considered as a marginal issue that only interests a small populous.

This is also reflected at political level, where FGM can be seen to be well addressed in specific policy areas such as justice, gender equality and human rights, where others such as migration, health, research and data collection lack a stronger and more consistent narrative.

The FGM is #MyIssueToo campaign sets out to cover all ground where FGM is still in need of being addressed and dealt with – calling on the publics support to amplify the message. To get involved in the “FGM is #MyIssueToo” campaign visit.