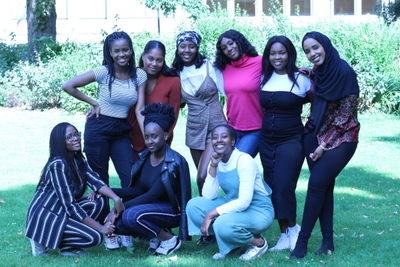 Youth engagement is crucial in fighting violence against women and girls and it is time we listen at what they have to say.

An estimated 68 million girls will be subjected to Female Genital Mutilation by 2030 if we don't accelerate our efforts to end this harmful practice. Across the world young people are speaking out, raising their voices and taking a stand to end FGM.

In Europe, the End FGM European Network has created a ‘Youth Ambassadors’ programme to bring together young activists from our Members organisations for them to share their experiences, make their voices heard at European level and help them develop their own activism.

Over the last two years, Hadeel & Alya from the UK, Hamdi & Veronique from the Netherlands, Djenab & Khadiatou from Belgium, Hawa & Salamata from France and Fatucha & Ana from Portugal, have worked tirelessly to raise awareness on FGM at national and European level.

When coming together the group realised it was hard to reach out to the younger generations. There is still a huge taboo surrounding FGM and the Young Ambassadors wanted to connect with other young people to share their ideas and knowledge on women’s health issues.

This is how The Purple Chair is born! The Purple Chair is a YouTube channel, created by youths and for youths, to educate especially the younger generations about Female Genital Mutilation. In the time space of one year, they will record and edit videos to raise awareness on FGM and debunk misconceptions about this harmful practice.

Stay tuned for more information and for their very first video!