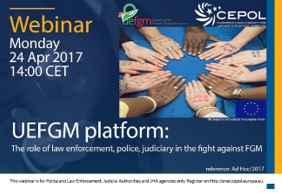 On April 24th, a seminar was co-organised by the European Police Force (CEPOL) and the United to End FGM European Knowledge Web-Platform (UEFGM) to raise awareness on the role of law enforcement, the police and the justice system in the fight against female genital mutilation (FGM).

The main speakers of the event were Sophie Forrez from INTACT and Christina Kaili from the Mediterranean Institute of Gender Studies. They provided an overview of what FGM and the United to End FGM project are, as well as some points on the role of law enforcement professionals and the judiciary in the fight against FGM. Later on, there was also a demonstration of the use of the UEFGM platform - an online tool designed to help professionals deal with those affected by female genital mutilation. A fruitful Q&A session followed, which concluded the webinar.

There was high attendance in the webinar with 55 participants from 12 countries who were involved in law enforcement or the judiciary. 22 of them provided feedback for the webinar which was rated 95.45% satisfactory! The webinar recording is accessible at the link. 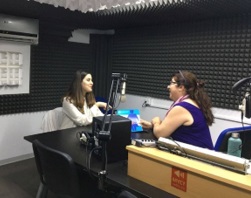 On April 25th, Christina Kaili, Project Coordinator at the Mediterranean Institute of Gender Studies, was invited on the Kaleid‘her’scope show, at the Cyprus Community Media Centre (CCMC), where she led an in-depth discussion on the global prevalence of FGM and the significance of training professionals to effectively support and protect women, girls and communities affected by this cultural practice.

She also talked about the United to End FGM Knowledge Platform - an online resource and knowledge centre designed to help professionals deal with those affected by female genital mutilation, which was recently launched and is available in 9 languages including Greek. The project is coordinated by the Cyprus University of technology, and comprises 10 member organizations, including the End FGM European Network. The End FGM European network (END FGM) together with 10 member organisations is part of the consortium of partners involved in this project coordinated by the Cyprus University of Technology (CUT). Listen the recording of the show!