Together with leading activists and professionals, such as Asha Ismail - Director of 'Save a girl Save a Generation', Hawa Touré - Director of Mauritanian Women’s Association Dimbe and Cendrine Vanderhoeven - Midwife and sexologist at CeMAViE in Brussels, UNAF made visible the physical, psychological and social consequences of FGM and demanded comprehensive quality care for surviving women and girls. The Secretary of State for Migration, Hana Jalloul, participated in the inauguration of the event. 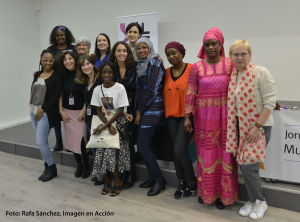 In addition, on February 6th UNAF co-leaded the demonstration of ‘Libres de MGF’ Network (Free of FGM Network) in the center of Madrid to claim the end of FGM, where a joint manifesto was read and featured the musical performance of ‘Astrid Jones and the Blue Flaps’. Check out the video just here! This was the first action and public presentation of the network, promoted by UNAF and formed by 19 entities, professionals and activists from all around the country, who have joined forces to advance the attention and eradication of FGM through coordination and networking at the state level in Spain.

Awareness and vindication actions on the occasion of International Day continued on February 12th with an information table at the ‘12 de Octubre’ Hospital in Madrid, where UNAF team together with cultural mediators, part of the hospital’s medical team and a representative of the Regional Government informed about FGM and offered UNAF materials for prevention and care. 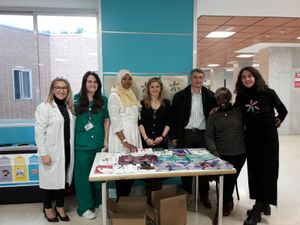 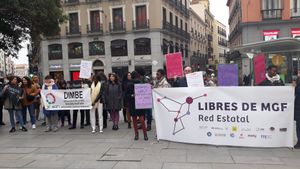