The NHS (National Health Service) of the United-Kingdom has announced the launch of clinics across England dedicated to specifically support, treat and help survivors of Female Genital Mutilation. Eight new clinics will open in four cities - Birmingham, Bristol, London and Leeds - with the aim of reaching women who have been subjected to the illegal procedure before they become pregnant. 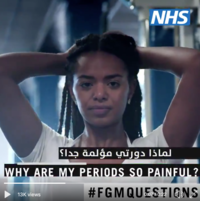 At the moment, the NHS typically reaches survivors when they are pregnant and come in for routine examinations. The centres will be run by specially trained doctors, nurses and midwives who will offer both emotional support - and be able to signpost women towards counsellors - as well as tailored treatment options to hopefully reduce any complications that can arise from FGM through pregnancy.

The health service says that over the last three months alone, almost 1,000 women and girls have been identified as affected by FGM. They hope that more than 1,300 women will benefit from the new clinics. Hilary Garratt, the deputy chief nursing officer for England, said in a statement that the clinics will be 'for women, run by women'. FGM is illegal in the UK (and has been since 1985) and is a form of child abuse, most often carried out on girls before they reach the age of 15. Despite the practice being illegal since the 1980s, it was only February of this year that the first FGM-related prosecution happened in the UK, when a mother was found guilty of forcing her three-year-old to undergo the mutilation. The clinics will also work with local community groups, including Women’s Health and Family Services, Manor Gardens (Dahlia Project), Forward, and the Ayda centre, to change the culture and thinking around FGM.Naana Otoo-Oyortey, the executive director of Forward (the Foundation for Women’s Health Research and Development), said: “The community advocates’ component of these services will provide valuable outreach opportunities to tackle much needed prevention work that has been underfunded within the UK".