The End FGM European Network are saddened to hear the news of the arrest and detention in Iran of Kameel Ahmady, a social anthropologist, researcher and a friend of the Network. Kameel, who is a British-Iranian dual national was arrested in Tehran on 11 August and continues to be denied access to a lawyer.

As such, we call on the Iranian authorities to ensure Kameel Ahmady is provided legal representation from his choosing and permit Kameel regular visits from family. We also call on Tehran authorities to clarify the grounds of his detention.

Please share you support for this statement and for Kameel on your social media: 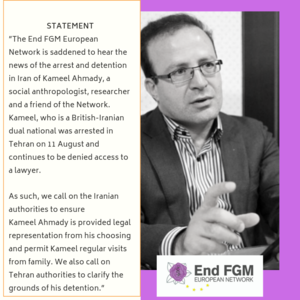 #FGM and child marriage researcher #KameelAhmady is being detained in Tehran. The @ENDFGM_Network and its members call on Iranian authorities to ensure he is provided with legal representation and allowed family visits over his detention.

Social anthropologist #KameelAhmady has been detained in Tehran since August 11. The @ENDFGM_Network and its members ask Iranian authorities to clarify the grounds of his detention and to provide him with fair legal representation as he is still being denied access to a lawyer

On 3 December, End FGM EU convened a meeting of the Inter-Regional Coalition to end FGM to connect and welcome new regional Networks and individuals in this global partnership.