On the 26th of April the End FGM European Network participated in the screening of the Egyptian movie ‘Amal’, followed by a panel debate with Isis El Gibali from the NGO WADI and Mohamed Siam, the Director of the movie.

Every year, One World Festival, organised by People in Need, is a unique opportunity for human rights documentary films to be projected and made accessible for everybody. This year, we had the pleasure to be invited for the screening of ‘Amal’. The main character Amal was 14 years old when the movie director Mohamed Siam met her for the first time on Tahrir Place, Egypt. It had been a year since she had started actively participating in demonstrations against the former Egyptian regime. Amal is loud, angry, fearless and a true leader.

Amal means hope in Arabic. And she embodies one of the strongest recommendation made to all Arab women “To the girls of the Middle East: Be immodest, rebel, disobey, and know you deserve to be free”, Mona Eltahawy.

After 83 minutes of introspection in the life on an inspiring future leader Fiona Coyle – Director of the End FGM European Network – invited Isis El Gibali and Mohamed Siam to talk more about the situation in Egypt and women’s rights. Indeed, 87% of women (UNICEF 2019) have undergone, among them 38% are medicalised FGM (PopCouncil 2018) in Egypt have undergone Female Genital Mutilation. It was important to remind the situation on women’s rights and sexual rights after the screening of the movie. Indeed, a country can’t be better if women’s rights aren’t respected. 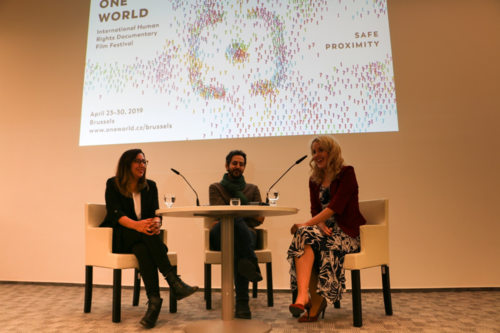 More about the movie ‘Amal’

Not only does the movie focuses on the Egyptian revolution, but mostly on Amal’s vision of the world and her breath-taking screen presence. Violence, insults, physical assault and attacks were perpetrated by Egyptian authorities on Amal’s body.

However, she follows her father biggest advice “If you have no fear, people will follow you” and it draws her strength and courage. Repeatedly, Amal’s womanhood is confronted by her male friends, who fear for her personal safety. Being treated as a potential victim, is the reason why she breaks in tears and refuses to follow patriarchal lead. Until the end, she shows a strong commitment to take part to a major change in Egypt.