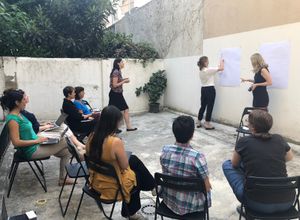 Since 2018, End FGM European network works alongwith its members in Germany (Terres Des Femmes), Italy (AIDOS), Portugal (APF), and Spain (Medicos del Mundo) to develop and implement an innovative new programme which recognises the role of schools in influencing values, social norms and attitudes, and shaping behaviours. This programme will assist young people to identify and resist gender-based violence and to become agents of change within their communities. Indeed, the school system is an ideal setting for tackling gender inequalities and gender-based violence from an early age.

Kick off meeting in Portugal!

In October 2018, the project was officially launched in Portugal, during a kick-off meeting. The partners had the chance to get to know each other. The objectives of this meeting were to have a better understanding of the project’s objectives and decide the 12 themes for the educational modules.

After the meeting in Lisbon, the partners and the Network worked on the development and production of 12 educational modules for primary and secondary schools in the 4 countries taking part to the project. The meeting in Berlin was a good opportunity for the partners to meet again, but also for the new staff members of the Network – Isma and Ophélie – to introduce themselves. The two consultants for the project took part to this meeting to finalise the education modules and work on the monitoring and evaluation framework of the project.

The partners worked hard to produce the modules and implement the project. That was a pleasure to meet with them and work together for the next generation!
The implementation of the activities will start soon, stay tuned to have news from our partners! 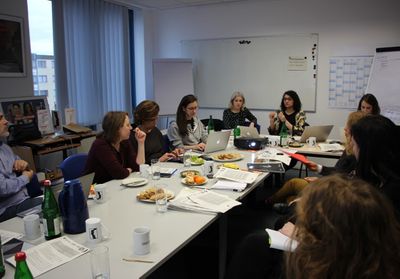