LebKom is starting a nationwide campaign entitled 'More protection for girls and women endangered by female genital mutilation in Africa'. There will be readings all over Germany from 'Desert Flower (FGM) is not inevitable – the Kisii, KNOWLEDGE and CHANGE'.

The launch will be on the International Day of the Girl Child, 11 October 2017.

The nationwide campaign was developed in a 2-day further-training course with participants from all over Germany.

Brief biographical texts from the FULDA-MOSOCHO-PROJECT will aim to show more and more people that female genital mutilation in Africa can be eliminated and that action to protect at-risk girls and women is worthwhile.

The reading will be rounded off with the moving short film 'Joyce'. Now 18 years old, in 2004 she was among the first age groups of girls in Mosocho who are now sustainably protected against FGM.

A special focus of this year's campaign is the FULDA-MOSOCHO TEAM's continent-wide cooperation: an encouraging example of bridge-building showing how successful partnership among equals with Africa can be! For more information, click here.

The nationwide campaign is part of a project entitled 'Female genital mutilation – more commitment for endangered girls and women in Africa! Strengthening volunteers, reach young people, move decision-makers', which is funded by ENGAGEMENT GLOBAL on behalf of the Federal Ministry for Economic Cooperation and Development (BMZ) and the Ministry of Economics, Energy, Transport and Regional Development, State of Hessen (HMWVL). Technical support is provided by the CENTER for PROFS. 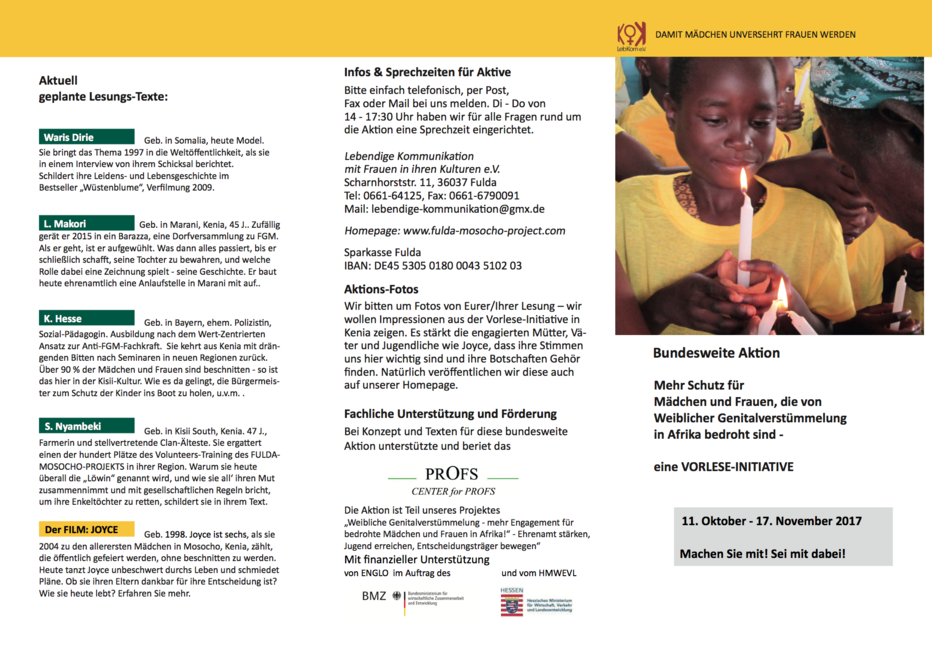