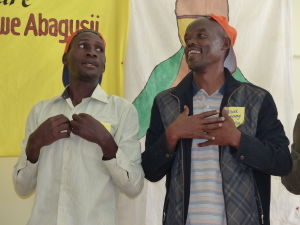 The last few months have been taken up with the upcoming high-level events – the Nairobi Summit ICPD+25and the UN CSW 64 / Beijing+25– during which the aim will be to examine the dimensions of FGM as they relate to achieving the SDGs by 2030. They can, after all, only be achieved if SDG 5 “Gender Equality” is focused upon and men and boys, who are global decision-makers, are successfully involved in the de-facto implementation of human rights for women and girls in everyday life.

The latest developments in the FULDA MOSOCHO PROJECT (FMP) in Kenya also show how progress can be made towards the Nairobi Summit goal of “ending FGM and GBV” as soon as men see that their responsibility for their daughters clearly puts them on the front line in ending FGM, and constructively put into practice the knowledge they gain in seminars on the Value-Centered Approach (VCA), having learned that women and girls are equal in value to them. The Kisii MOVEMENT “A New Growth in our Kisii Culture”, which originally arose in Mosocho, continues to spread further and further. More and more men consider it important to set an example in their own families and communities, giving their sons the freedom, and their blessing, to marry women who have not been “circumcised”. They are not only rewriting the ancient Kisii law which says that only a “circumcised” women is one who is honourable and, above all, marriageable: they are directly putting the new attitude into practice.

In Germany, LebKom e.V. cooperates with pro familia Hessen on the project “Hessen takes action against FGM”, which is funded by the state of Hessen. This includes the development of a training series, which has been running since September. Several of them are implemented by LebKom e.V., by an Anti FGM expert trained according to the VCA. It is aimed at professionals in social work, medicine and law. The goal is to lastingly integrate the topic into professional’s everyday working life, so that they can provide considered, competent information and deal with women and girls affected by FGM.Initial feedback shows how, among other things, examples from practice on the FULDA-MOSOCHO PROJECT can provide valuable inspiration for how to approach women and men with appreciation and cultural sensitivity.