On Thursday and Friday, 1 and 2 October, the CHAIN project, co-funded by the European Union, started officially with a kick-off meeting.

Due to the current restrictions caused by the COVID-19 pandemic, the project consortium met online to discuss the future activities and outcomes. The project is coordinated by TERRE DES FEMMES (Berlin, Germany) and will be further implemented by four partner organizations: Action Aid Italia (Milan, Italy), Equilibres et Populations (Paris, France), Save a Girl Save a Generation (Madrid, Spain) and End FGM EU.

The CHAIN Project aims to promote a multi-disciplinary cooperation to end FGM and Early and Forced Marriage, through an intervention that is aimed at bridging the gap between affected communities and relevant professionals through a chain approach. The community experts will train key professionals and build their capacities to support affected girls and women at risk, and empower their own diaspora communities through awareness raising, sensitisation and networking. The project will especially focus on community leaders (religious and traditional leaders, community elders) as well as formal and informal community-based organisations to mobilise them as multipliers in tackling FGM and EFM. 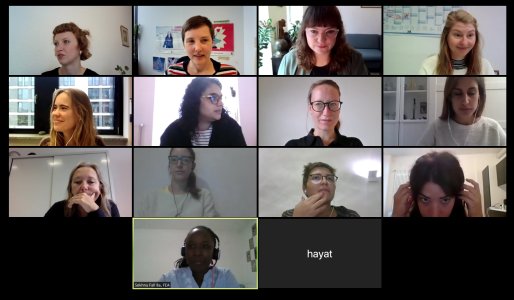 Even though it was not possible to meet in person in Berlin, the partners exchanged experiences from previous projects, discussed challenges and clarified questions. The kick-off meeting was followed by two workshops: the first one on the concept of an awareness-raising campaign and the second one on the development of a training manual on Early and Forced Marriage.