[click here to read the original article in French]

Appointment of Equipop at the High Council for Equality between Women and Men: a new commitment to feminist policies

Equipop is one of the organisations that will sit at the High Council for Equality (HCE) between Women and Men. It is a recognition of the work that has been done in recent years and a responsibility also shared with other members to contribute to gender equality policies over the next three years.

On June 25, Nicolas Rainaud, Head of Advocacy France & International, was appointed member of the HCE as a representative of Equipop, for the term 2019-2021, under the presidency of Brigitte Grésy.

The HCE was created in 2013 to lead the public debate on issues of gender equality and women's rights. Its mission is to evaluate public policies dealing with gender equality, disseminate researches in the field, and make recommendations to the Prime Minister.

This appointment comes after various collaborations between Equipop and the HCE. For example, Equipop contributed to the monitoring of the "Gender and Development 2013-2017" strategy. The two structures also carried out joint advocacy on several themes, including funding for sexual and reproductive health and rights, and promoting inclusive language.

Equipop will share the lessons learned during its 25 years of existence, especially in the process of gender mainstreaming in national public policies, in international negotiations but also in civil society associations.

Equipop hopes to bring added value to the reflections on two priority issues: the affirmation of the SRHR as the basis of the fight against gender inequalities and the implementation of the "feminist diplomacy" carried by France.

Equipop thanks the Prime Minister, Edouard Philippe, as well as the Secretary of State for gender equality and the fight against discriminations Marlène Schiappa, for their trust. Finally, the organisation wishes to acknowledge the commitment of Danielle Bousquet, President of the HCE for the first two terms in this collaboration process. 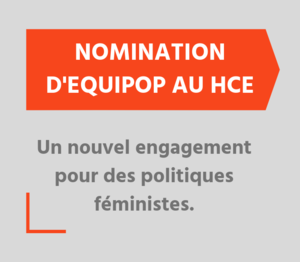