On the 12th of July 2019, End FGM European Network was invited to the conference the French Senate “Reinforce the policies and the collaboration between all the actors against FGM” of the BEFORE project. The project BEFORE, supported be the European Union’s Rights, Equality and Citizenshup Programme, brought together 4 actors to promote a deep political and cultural change and to strengthen the role of women in the fight against FGM. Differenza Donna (Italy), No Peace Without Justice (Italy), Institut de Santé Génésique – ISG (France), La Palabre (Belgium), joint their forces to enhance the effectiveness of the systems of emergence and response to the phenomenon from the institutions and civil society with a shared strategy at a political legal and social level.

Our Programmes Officer, Isma Benboulerbah, was invited to present the work of the Network, alongside the key actors of the BEFORE project and key French actors of the fight against FGM: Dr. Pierre Foldès, Dr. Frédérique Martz, Mrs. Khady Koita, Mrs. Vanessa Doddi, Mrs. Isabelle Gillette-Faye, Mrs. Linda Weil-Curiel and Mrs. Yasemin Nun. The work of the Ambassadors was strongly promoted during the Conference and Roukiatou Sissoko, Ambassador, was present and supported the involvement of community members to end FGM:

"Conference like this are a way to get things done, but without the diasporas in the European countries, it won’t be successful, we all have to rely on the words and the needs of those people." 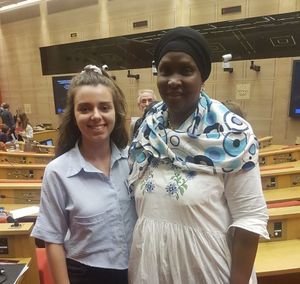 It was an honour to promote the work of the Network and show the positive work that was done at a regional and international level to end FGM.