In the past months, we hosted the Webinar "Ensuring a Gender-Based Violence education in Europe" & Isma Benboulerbah, our Project Coordinator, had many key meetings to promote the Project and talk about it to a broader audience.

To close 2 years of work on the project, we hosted the Webinar "Ensuring a Gender-Based Violence education in Europe". The event was open to the public to share with all of you the results of the project! In the last two years, End FGM EU, AIDOS (Italy), APF (Portugal), TERRE DES FEMMES (Germany) and Medicos del Mundo (Spain) have been working on changing children's attitudes towards gender stereotypes & norms reinforcing Gender-Based Violence.

On 7 December, all the partners came together to share the results of the project and their experiences. Particular attention was paid to the differences between the approach and the challenges encountered in the different countries in which Gender ABC was implemented. The partners also explained how the project was adapted to the COVID-19 context and the Monitoring & Evaluation Consultant has presented the preliminary results of Gender ABC.

For instance, on 20 November, she presented the project to Sahiyo, a NGO based in India and working to end FGM in the Bohra community. During the call, they had the opportunity to talk about the importance of Gender-Based Violence education to children and young people, in Europe and beyond! 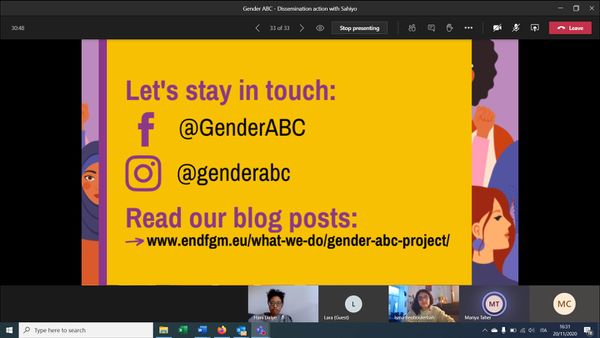 On 25 November, Isma presented Gender ABC at a conference organised by Projekt Sex (P6) at Lund Uni. P6 is a student organisation that works to promote safer sex and open-minded attitudes to sexuality and LGTBQ topics. During the conference, called “Urgency, pandemic and cross-country perspective”, Isma explained what Gender ABC is and how one of the modules raises awareness about domestic violence.