In Portugal, APF organised an Online Campaign, called “Live the Tradition Without Discrimination! - Prevent Gender-Based Violence”. The campaign is part of the Gender ABC Project and is taking place from the 1st of June until the 30th.

Due to Covid19, the Gender ABC's awareness-raising activities targeting families and communities had to be carried out online.

That's why five classes of primary and secondary students from two schools of Amadora Oeste decided to launch an Online Campaign on the Prevention of Gender-Based Violence! They are targeting the popular religious festivities of the Patron Saints.

What are the religious festivities of the Patron Saints?

In Portugal, the month of June is time to celebrate the Patron Saints of each region. These popular religious parties are internationally famous and move crowds. During this period, dance parades are organised and dating and weddings are celebrated. However, the tradition only celebrates hetero-cis-normative relationships.
Within the Gender ABC Project, students and teachers accepted the challenge of making these festivities more inclusive. 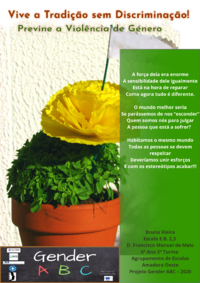 How are they being more inclusive?

For the Online Campaign, each participating student wrote a poem addressing one of the topic covered in the Gender ABC's Educational Modules and in the sessions in the schools (social norms and gender stereotypes, gender bullying and cyberbullying, violence in intimate relationships, empowerment and self-determination, etc.).

The time is NOW!

Join the Online Campaign: visit the Facebook page @EscolasAmigasdaIgualdade and give your thumbs up to the poems of the young authors!