“Building bridges between the EU and FGM countries of origin” 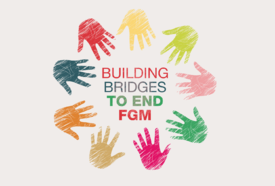 Female genital mutilation (FGM) is a human rights violation that has existed over centuries and is strongly linked to social norms shaped by tradition, culture and religion.

According to the latest UNICEF statistical report, while the exact number of girls and women worldwide who have undergone FGM remains unknown, at least 200 million girls and women in 30 countries, mostly but not solely in Africa, have been subjected to the practice.

FGM is now recognised as a global issue, which affects all continents, including Europe. FGM has emerged as an issue in the European Union (EU) due to migration from countries affected by the practice – migrants’ countries of origin – and it is now practiced by several communities residing in the EU, which have strong transnational linkages both within the EU and beyond.

The decision to cut or not to cut a girl is often not an individual one: families and communities both in the country of origin and in countries of residence have a large influence on it. At the same time, migrants returning to their country of origin can represent a challenge for FGM abandonment programmes both in a positive and negative way. Sometimes members of affected migrant communities may encourage communities to perpetuate or maintain traditional practices like FGM, in some cases due to the lack of awareness of the social change that might have occurred in the country of origin since they left. In other cases, migrant organisations, as well as migrants who return to their countries of origin can play an important role in showing how communities can shift from FGM practices without losing their sense of belonging and cultural identity.

Therefore, the practice must be addressed in bi- and multilateral discussions among countries and stakeholders and requires the development of measures with a cross-border dimension and collaboration among EU stakeholders and with partners in countries of origin.

The End FGM European Network is dedicating its 2017 annual campaign to the theme of Building Bridges in order to fine tune its building bridges approach and pursue it with concrete actions and initiatives.

The End FGM’s definition of Building Bridges in tackling FGM is:

“the facilitation of synergies between actors and sectors in countries of residence and countries of origin to implement actions, policies and legal frameworks to end FGM by tackling the transnational nature of FGM”.

With this definition in mind, End FGM is organising a seminar in Brussels on the 30th of May.

We invite CSOs, service providers and practitioners, researchers, experts, lawyers, academics, civil servants, activists and any other persons working in the field of female genital mutilation to submit proposals for a presentation or a workshop.

We are interested to hear about projects, activities, policies and research which aim to concretely enable cooperation between the EU and countries of origin. These could involve different types of actors from different sectors as long as they have a focus on FGM – we are keen on including not only promising practices but also initiatives that were not successful since these can also provide useful lessons learned.

The working language will be English (translation will not be provided).

We most welcome interactive and creative working methods. For example

Abstracts can be submitted by filling in the Abstract submission form and sending it to info@endfgm.eu by Friday the 5th of May 2017.