Salma* and Adia* are sisters but only Adia has undergone the harmful and traumatic procedure of female genital mutilation. After attending an information workshop in Hamburg hosted by community representatives (also known as CHANGE agents *) who advocate to abandon the harmful practice of FGM, Salma and Adiass’ mother Farrah* decided Salma would never undergo FGM.

“The representatives explained constructively how it is not necessary to cut our girls, that the practice is seriously harmful to them and has no place in society anywhere”

Having made the decision to prevent her youngest daughter from undergoing FGM, a practice which involves 'the partial or total removal of the external female genitalia or other injury to the female genital organs whether for cultural or other non-therapeutic reasons', Farrah is grateful to the community representatives.

“Having people who understand our culture, speak our language and take the time to listen to us has been a vital aspect to this transition. Without their dedication to changing attitudes towards FGM, I would not have made the decision not to cut Salma.”

On September 26th, 7 diaspora community representatives trained via the Change Plus programme to abandon the practice of FGM, hailing from three EU member states (France, The Netherlands and Germany) will gather in the European Parliament to meet with EU institutions’ representatives and discuss the role communities play and the challenges they face in ending FGM in Europe.

The meeting will be hosted by MEPs Julie Ward (S&D) & Anna Maria Corazza Bildt (EPP).The event will be crucial for EU decision and policy-makers in Brussels to listen to community representatives from the grassroots level within EU member states, with the aim to elaborate common flexible and innovative solutions to achieve the common goal of putting an end to the practice of FGM in Europe and beyond.

FGM is prevalent among certain diaspora-communities in Europe originating from countries where the harmful practice is widespread. The exact number of women and girls living with FGM in Europe is still unknown, but the European Parliament estimates that there are around 500,000 girls and women currently living in the EU who already have undergone FGM, with another 180,000 at risk of being subjected to the practice.

As CHANGE Plus aims at promoting behavioural change towards the abandonment of FGM in practicing communities across the EU, these girls and young women at risk are the direct beneficiaries of the Change Plus project. 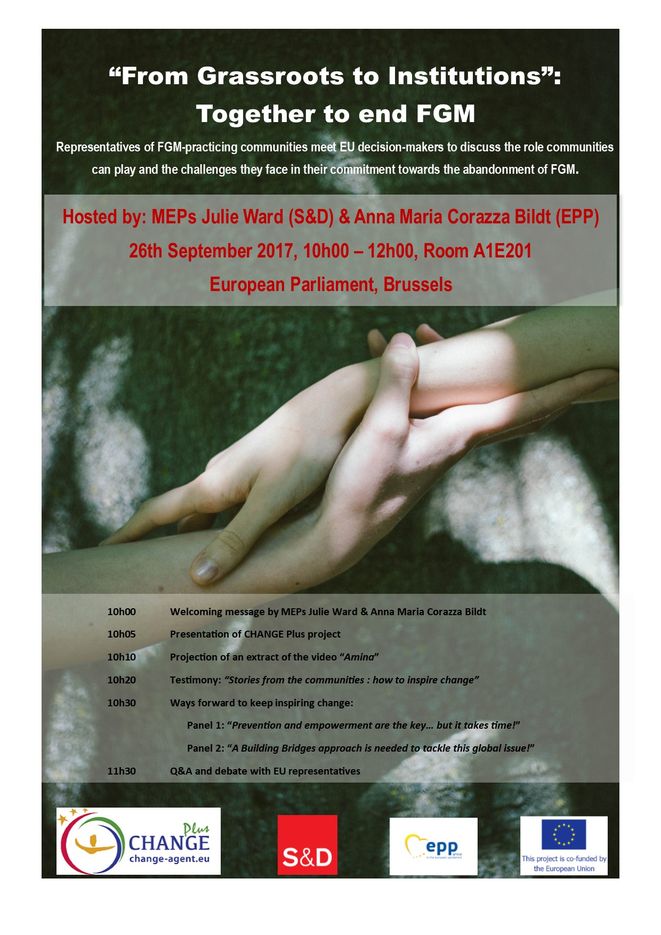 * CHANGE Plus is a project aiming at promoting behaviour change towards the abandonment of Female Genital Mutilation (FGM) in practising communities across the EU.

The project is coordinated by TERRE DES FEMMES and jointly implemented by seven European partner organisations and two African associated partners. It is co-funded by the European Union.