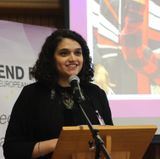 Isma Benboulerbah is coordinating and implementing the programmes of the Network, such as the European Commission funded “Gender ABC” project. As Programmes Officer at the End FGM European Network, Isma is in charge of the community development and work with FGM-affected communities through the Ambassadors and Youth Programmes to end violence against women and girls. Previously, Isma worked with End FGM EU’s Members Equilibres & Populations, on the project “Building bridges between Europe and Africa to end FGM” and was also elected board member and acted as Secretary General of the French network against FGM Excision Parlons-en!

Isma is a strong and passionate feminist activist and has been working for years on programs focusing on fight sexual and gender-based violence and SRHR. After several years of professional experience in France, West Africa and with women from the Arab-Muslim diaspora and FGM-affected communities in Europe, Isma has built up important knowledge on sexual and reproductive rights, gender-based violence, harmful traditional practices around the bodies of girls and women, and particularly on Female Genital Mutilation.