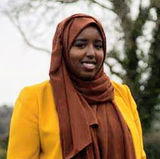 Fatima is an experienced speaker and advocate, with a focus on gender-based violence and in particular FGM, domestic violence and Child, early & forced marriage (CEFM). She first started the fight against FGM in 2012 as a FORWARD youth member. Fatima later co-founded Youth For Change in 2014, a global youth-lead network, working in partnership with organisations and governments to tackle gender-based violence and create positive change for the youths.