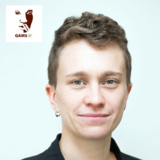 Stéphanie Florquin is a social scientist and project officer specialised in gender equality. She has been working for GAMS Belgium (Group pour l’abolition des mutilations sexuelles féminines) since 2015. Stéphanie is the coordinator of the Concerted Strategies in the fight against Female Genital Mutilation (CS-FGM), a Belgian network for professionals and activists working with communities affected by FGM. She also works on several projects aiming at reinforcing concertation and capacity building in the area of FGM on a national, European and international level, such as the Community of Practice on FGM (CoP FGM) and the United against FGM web Platform (UEFGM). Moreover, as a qualitative research she has been working on the latest EIGE study of girls at risk and previously explored male involvement in FGM during the “Men Speak Out against FGM” project.

Stéphanie joined the End FGM EU's Board in 2018.