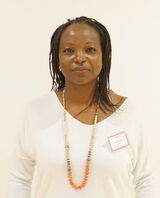 Based in London (United Kingdom), Aminata is an End FGM/C (Female Genital Mutilations/ Cutting) advocate from Guinea (West Africa), the second country with the highest FGM prevalence in the world (97% according to WHO).

Aminata is currently a Social Worker and FGM/C Health Advocate working with NHS England. Before this, she worked in Human Resources management, Adult Professional Training, and Early Childhood Education. Since 2017, Aminata is the head of women's support and community partnership at LA FRATERNITE, a community-based charity working to end FGM/C and other forms of violence against women and girls. She has been an Ambassador for End FGM EU Network since 2019 and continues to jointly work with FORWARD UK (Foundation for Women’s Health Research and Development), a leading African women-led organisation working to end violence against women and girls, to support BAME (Black Asian and Minority Ethnic) communities on various issues affecting them, inclusive of health, education, child protection, immigration, VAWG (Violence Against Women and Girls), etc.

Aminata is a self-motivated individual with a passion for helping others, ending gender-based violence and harmful practices, upholding human rights and making a social impact, demonstrated through her commitment to community work and continuous activism/advocacy for marginalised individuals and communities.