DOWNLOAD THE REPORT IN ENGLISH // IN ARABIC // IN FRENCH // IN SPANISH 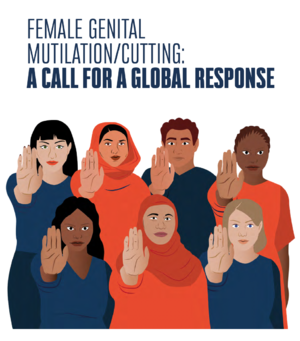 This report shines a spotlight on the presence of FGM/C in over 90 countries around the world and was written in collaboration by the End FGM European Network, Equality Now ans the US End FGM/C Network.

It highlights the need to act to end FGM/C without delay. It is a clarion call from survivors of FGM/C across cultures, communities, and countries to governments, the international community, and donors to recognize FGM/C as a global issue, requiring urgent global attention. Each of these women was cut. Now they are breaking the cycle of tradition and patriarchy by speaking out against FGM/C or sharing their experiences of being cut.

The importance of eliminating FGM/C is recognised within Goal 5 of the Sustainable Development Goals (SDGs), dedicated to achieving gender equality. Target 5.3 under this goal requires all 193 countries that signed onto the SDGs to take action to “eliminate all harmful practices, such as child, early and forced marriage and female genital mutilation”. With only ten years left to eradicate this widespread and harmful practice affecting millions of women and girls globally by 2030, the time to take stock and to accelerate action is now. This report highlights the global nature of FGM/C, shedding light on the available data on the practice of FGM/C in over 90 countries across the globe. The report also provides information on the legal status of FGM/C in those countries.